The end of the Bowls season approaches!

On Sunday 16 Calne members made the trip over the M4 to Supermarine Bowls Club which has a long history, originally being part of the Vickers sports and social club.

Supermarine have the largest green in Wiltshire being a full international size of 40 mtr by 40 mtr. Calne’s green for comparison is 35.80 mtr x 35.80 mtr.

This means that a long jack really is long.

Calne players quickly discovered that Supermarine have quality in depth and that they don’t take prisoners.

It is valuable experience for Calne to play opposition of a higher standard then they normally do because it forces you to raise your game.

Suffice to say that we lost on all 4 rinks and the score cards have been conveniently mislaid.

However, everyone enjoyed the game, we avoided the rain which stopped as soon as we got on the green and started again as most rinks completed the 21st end.

Supermarine have agreed to play at Calne next year on the 9th August when we hope to give them a stiffer test.

Good to see Pat out and about, attending as a spectator. 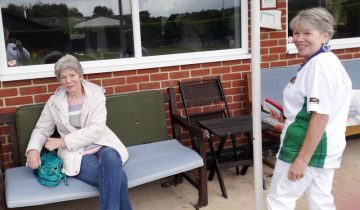 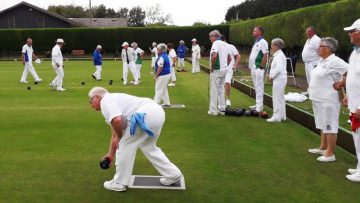 In the last North Wilts Mixed league game at Trowbridge Town we lost 42-53 (2-8 on points). Only the league Gala day on the 9th Sept now.

On Tuesday in the White Horse league, we were away to Devizes, after a poor start, being 3-9 down, we rallied and eventually won 25-16, this win ensured we had won the league with 1 game to go, well done lads, promotion 2 years running.

The ladies last league match of this season took place at Melksham against Avon Astras. Start time of 2.30. This match was re-arranged from May 8th. The day started with heavy downpours of rain. However, we turned up and it was agreed that the game would take place.We had a very good end to this match and we came out the overall winners at 4-2 to us.The score was 36 to 33. Brilliant result once again and a great effort by all players.

The Men’s Mid Wilts Triples league were away to North Wilts B on Wednesday and managed to avoid the rain, ending up 99-36 (14-0) winners. The following day the visitors to Calne were 3rd placed Trowbridge, it was a good game with Calne winning73-61 (10-4 on points)

Not often we get the chance to put a competition picture up, but this is such a good composition I could not resist it (well done Steve?)