On Tuesday in the West Wilts League we were at home to BOA Constrictors, the league already won, however the team did not slacken they won 26-11

Wednesday was a busy day for our ladies. They played a friendly match away at Trowbridge Westbourne where we were warmly welcomed with a cup of tea. We then moved onto the green in lovely sunshine and after some great bowling Calne came out the overall winners.The scores did not matter though as it was such a good afternoon, followed by a nice tea provided by our hosts..

It must be said that our new and inexperienced ladies played to a high standard and will be worthy assets to our ladies’ team in due course. Thank you for today ladies.

It was really good to have Pat Watson there overseeing our match.

Also on Wednesday the Red Hatters visited the green for a roll up and tea.

On Thursday the Mid Wilts Triples team was away to currently 4th place Spencer Melksham.  Unfortunately it was not Calne’s night and they lost 0-14, however Trowbridge Town dropped 4 points and it could still be promotion as Calne play Winsley next Thursday, so there is still a chance!

The ladies’ section were pleased to have two Calne players selected for the Nor West League versus Salisbury and District League friendly match on Thursday. This was played at North Wilts green and was a 1.30 start. Representing Calne were Ann Chatwin and Yvonne. Both enjoyed this match which was played in lovely weather. Ann was part of the highest scoring rink for which she won a prize. Well done ladies for representing Calne in the company of some very good players, including the present BW Ladies’ President.

Friday brought the Wiltshire Masonic to the green at Calne.  The game was reduced to 15 ends (from 18), due to the heat, it was an even game with 2 rinks won, 2 rinks lost and 1 drawn, score Calne 66 Masons 57, but that is immaterial as it was a good friendly and sociable time for everyone, the green fees they normally to clubs they visit and raffle monies were donated to their charity (£130). The Masons certainly enjoyed themselves, even Martha who was an honorary Mason for the day!! 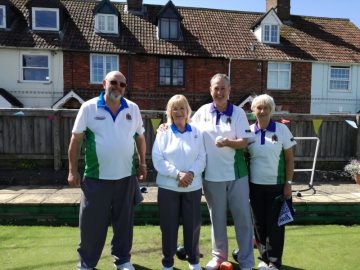 Another competition completed. Mary and Steve came out on top in this exciting mixed pairs final