The week started with our Gala Day, it was well attended and enjoyed by all who attended, the sun tried to shine but failed, at least it was dry. Photos will follow.

The leagues have now finished and the season is winding up with competition finals, etc.

On Tuesday evening it is our Club night, so if you feel like having a go at bowls, just turn up 8n flat shoes about 5-30/5-45pm. The ladies Seidal League played their final game of the season this evening. A very close game against Chippenham Park. Calne Blues dug in and secured a win. Good way to end the Seidal league season, finishing in 4th place in the table. Good going for novices.

On Wednesday there was a friendly between the Wiltshire Masons and ourselves, which was a great deal of fun with the Masons running out winners 85-75, even though Calne won 3 out of 5 rinks.

In the evening our daring duo, Dave J and Yvonne traveled to Avon Bowls Club for the final of the West Wilts Holloway mixed pairs competition, the first time a pair from Calne had reached the final. With 13 supporters from Calne there they won the game to become champions, see separate entry for further details.

On Thursday the Men’s MWTL played in the final of the Imagine Cruising Trophy at Avon B.C. under floodlights, second time for Dave Johns. They were against Spencer Moulton a team in the Premier league, Calne played a great game and only lost by 6 shots (45-51) in the end, winning 2 out of the 3 rinks. Well done lads. 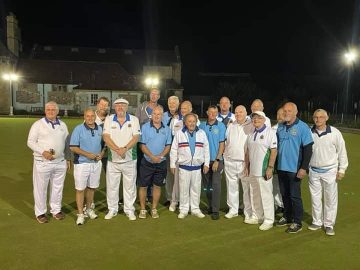 To round of the week the Ladies celebrated their 60th year with a get together of ‘non bowling’ organisations, along with past members for a cream tea afternoon, a great success – see separate entry for photo’s