The best news of the week occurred on Tuesday when 2 of our bowlers got hitched, congratulations to Mr and Mrs Richardson, who got married this week, we wish them every happiness. 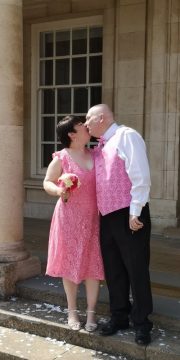 Now back to bowls, on Sunday the week started with our first friendly at Cirencester, the day started with rain but the rain cleared and it was dry all afternoon, although overcast and chilly.

It was 5 rinks of triples, Calne won 2 and the home team 3. However the final score 78-64 was in favour of Calne, with Mayumi winning the spider.

Everyone enjoyed themselves and at times found the green challenging, Cirencester are hoping to send a team to the Gala day and have a return visit next year.

In the evening it was the quarter final of the West Wilts Holloway Pairs with Yvonne and David taking on Marcia and John from Avon, it ended with the Calne pair winning 17-8, they are now on there way to the Semi’s, based on last nights performance it will take a good pair to best them.

On Tuesday in the WHL Calne A who are at last top of Division 3 were away to Devizes B and managed a hard fought 12-10 win, Calne B in division 5 and having a run of successes were at home to BOAConstrictors and also managed a very good win 21-10. The Ladies in the Seidel league.

In the evening it’s was the weekly Tuesday night club night, it was very well attended, with 2 visitors from our Open Day trying out bowls again.

A change from bowling for our Chairman.

On Friday in the BW Ladies Triples league Calne, who are top of the league, were at home to Trowbridge Westbourne start time 6-00pm. This match ended in a draw, 31 for and 31 against giving each team 3 points.

Saturday brought Winsley to our ground on what is always a very friendly visit for 3 rinks of 4. It started well with Josie winning the spider and the rain holding off until the 10th end when the teams took shelter for a team biscuits and homemade cake baked by Pam G, the game restarted and managed another 5 ends before it started raining again, the captains then decided to call a stops after the 16th end, the overall score was 41 -40 to Winsley, with the captains not trying to hard on the last end so that their rink ended in a draw. All in all it was very enjoyable despite the rain, with thanks to Les, Panos, Stuart and Pip for all the catering.