On Monday evening our ladies were away to Devizes Demons they won 36-35.

David Johns played Steve Heseltine (Chippenham Town) in the B. W. National Men’s Singles competition and lost 16-21.
Paul Mackie now joins the 3rd round of this competition after having a walk-over in the previous round and won against A Rice-Smith at Malmesbury 21-10, and Barry Wicks unfortunately lost in a very tight game 19-21 to T Bailey also Malmesbury.

On Tuesday afternoon our ladies played at home in the  Seidal leaque (Blue team)  against Box, They had a great win 29-11.  Well done ladies!!

On Tuesday we had three ladies teams playing in the Benevolent Triples at Stratton Churchway, Yvonne’s team won her round but unfortunately will not be able to go through, as the final dates clash when they are at Leamington. The ladies had an enjoyable day.

Club night at normal in the evening.

On Wednesday we hosted the Wiltshire Masonic B.A.  game against Somerset Masonic B.A, it was good game with Wiltshire running out winners. The clouds threatened all afternoon but in the main the rain stayed away, pictures are on the gallery page, but here is the spider mascot. 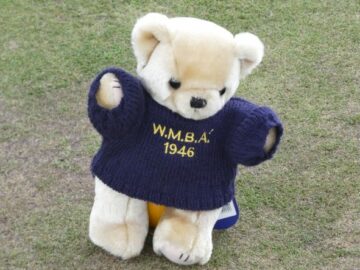 In the M.W.M.T.L. on Thursday both teams were playing, the A team unfortunately had there second loss in succession away to Blue Circle, 51-52 (2-8pts). However the B team were at home to Warminster B and won 50 43 (7-3pts).

Yvonne has agreed that the  ladies B.W. league has been postponed against North Wilts on Friday 29th July, due to the club being hosts of the Top Club game between Westlecot and Box. This game will be rescheduled.

On Friday evening we hosted the B.E. Wiltshire Final of the Women’s Top Club Competition between Westlecot and Box, Box came out winners 3-1. It was a great game, The teams enjoyed the game, Pip and Stuart put on a nice supper for everyone, which was very much appreciated by all. Les played his role as umpire for the first time and showed great competence. Thanks to Hugh for marking the singles game, also thanks to our members who came to support this game, It was the first time the club had hosted such a game. The competitors thanked the club for a nice evening. 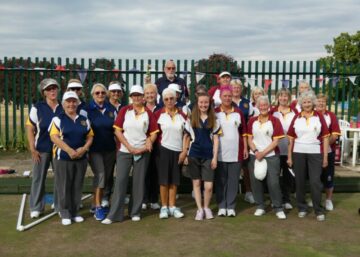 Other photos are in the gallery

Coaching as normal on Friday and Saturday.