We have made some changes to improve the day and would ask anyone interested to use the links below to view full details and obtain an entry form.

We look forward to an enjoyable day of bowling.

We are holding open days on the above dates, so why not come along and see why the sport of bowls is so enjoyable.

Gates open at 10.00am until 3.00pm, refreshments will be available as well as helpers to show you how it all works.

For any further details please see below. 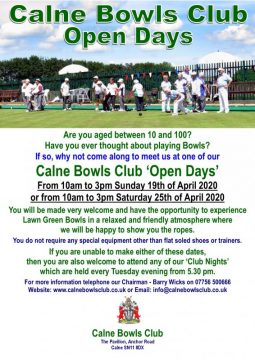 The new season is nearly upon us and on Sunday 15th March 2020 we will hold a skittles evening, obviously in the Rec Club Skittles alley, when members can pay their membership/competition fees.

Renewal notices have been sent out to members and copies will be available on the evening, along with competition entry forms.

Please note all membership fees are due by 1st April 2020, whilst competition entries must be made by 2nd May 2020

Whilst the outdoor bowlers have a rest, the indoor Short Matters celebrate the last session before Christmas – Monday 23rd Dec 2019.

The session included a shorter bowling session and wonderful food that had been brought by the members.  28 members attended and a lot of fun was had by all.

Father and Mrs Christmas were there, along with their little helper and a very attractive reindeer.  Other members had lights, festive jumpers and a variety of headgear.

Thanks to all who made it such a success, in particular Mr & Mrs Christmas.

A great night, well attended and organised.  Many thanks go to Yvonne and Steve as well as Rita, Ann B and several others for supplying the food and help.

The winners were the Andy Collier team; congratulations to them and to all those that attended and helped make it a fun evening.

Below are some photo’s with suitable? captions.

At the A.G.M. on Saturday the 2 Owls that have done such a great job of keeping the pigeons away from our grass seed, were officially named, the winner of the bottle of wine was Ann Burke, well done Ann.

So I am proud to announce that

CALNE BOWLS CLUB is now the official home of

TWIT and TWOO – the scariest Owls in Wiltshire

There were 14 entries ranging from the PIGEONATERS

To ERROL and BRODWIN

There was even a suggestion that they should be named every year after the winners of the Ladies and Men’s singles competition, this year BARRY and YVONNE, but it was obviously thought that this was a step to far!

Thanks to Martin S who had the idea and to all who took part, it led to a fun end to the AGM.

Following a successful launch of the Thursday evening session on Halloween night, the following piece appeared in the Gazette and Herald on the 21st November.2019 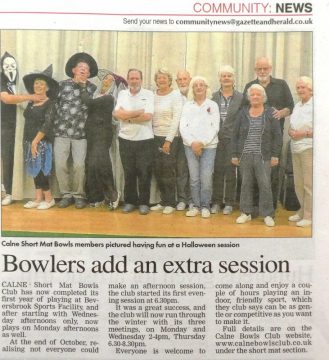 Lovely morning at the club with the green covered in frost and looking good.

October the 31st Halloween, a good night to start an evening session, it was strange bowling in the dark, as up to now our sessions have been in the afternoon.

Just a big thank you to Bryan H and Steve M for removing the old wood from the ditch sides in readiness for the new wood to be installed, all ready for the 2020 season (thanks in advance Martin G!)  the old wood will be on its way to the bonfire at Beversbrook shortly.