The season has almost ended, several members have been having roll-ups as the weather has been excellent for bowls.

However on the 16th October the green closed and winter work to get it ready for next year starts, the following photo shows work progressing (19th October) 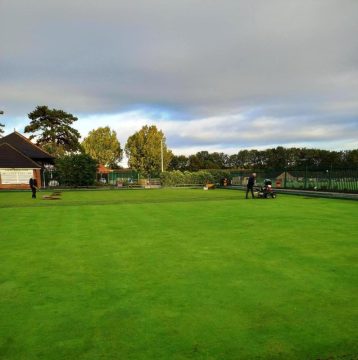 We have received confirmation from Calne in Bloom regarding our award this year, well done to all the members who helped, as well as Calne Town Council for supplying a grant for the borders to be refreshed and the surround made safe. 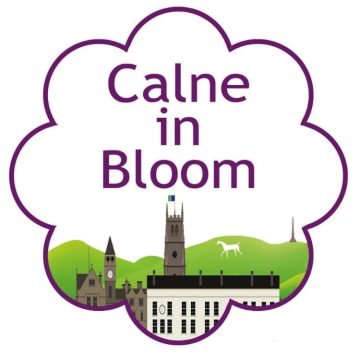 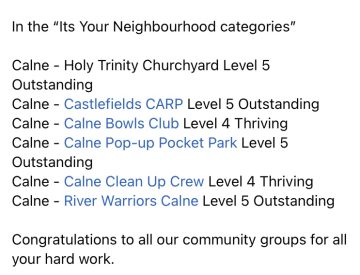 Sunday 24th October is the annual Luncheon/presentation at the North Wilts Golf Club.

Saturday 30th October is the Men’s end of season meeting at the pavilion in the morning.

A big thank you to all our sponsors and supporters, as well as the members who have helped to make it such a successful season for Calne Bowls Club.

Whilst a certain amount of social bowling carries on – weather permitting – On Saturday several stalwart club members gathered early in the morning to put the green to bed, so to speak.All the benches and tables/chair have been stacked away along with the bowling equipment, a few items being left out for members use up to the 16th October along with the advertising signs, another season over.

We now enter 2 months of meetings along with the Annual Luncheon and Presentation ceremony on Sunday 24th October.

In future only monthly posts will be made sarting with the October one, that will be on the website later this week.

A big thank you to all our supporters and sponsors for their help and support through the playing season.

Last but not least to our 70+ members who have made the continuing story of Calne Bowls Club a successful one, we look forward to meeting opur many friends on the green again next year when hopefully Covid will be a distant memory, in the meantime stay safe.

The format was introduced in 2018 at the suggestion f our then Ladies Captain Pat Watson.

5pm set up table and chairs on rink 1

Now here are the photos, no descriptions needed as they are self explanatory.

The last week of bowling at the club, time to give the rinks a rest over the winter, however there is still a lot going on this week.

The week started with the Men’ drawn triples game on Sunday afternoon, this was to celebrate the successes the men had this year, it was a very enjoyable afternoon with the final positions being

The spider ended was a tie, Barry’s W and K taking the wine.

Monday evening was the final of the Mixed Triples, it was closer than the score shows with Barry W, Yvonne and Dave J beating Derek, Angela and Dave D. 22-14, it proved to be a very entertaining game.

Wednesday evening was the remaining semi-final of the Aussie Pairs competition, it resulted in win for BarryW/Dave J. against Allan/Barry K 21-7.

Whilst that game was taking place on rink 6, rinks 1, 2 and 3 were taken over by the Cherhill scout group. this was a thank you and an introduction to bowls for the group, below are some photos, it was an interesting experience and they all appeared to enjoy themselves.

On Thursday in the morning it is the final of the Ladies 2 wood competition, followed in the evening by the Final of the Aussie Pairs Competition.

Friday is a free day, however Saturday is the official closing day with a mixed drawn triples competition, see separate entry for details.

On Sunday there was a friendly against Malmesbury on their artificial grass, apparently they are unbeaten at home since having the artificial surface done, we gave them a good run for their money but unfortunately lost, but it was a very enjoyable game.

The week started with the Local Sponsors Day on Sunday, it was a very good afternoon but due to the lateness in the season only 2 of our many sponsors could make it, thank you 3D computers from Chippenham and Oakleaf Accounting from Calne. It was a little overcast but dry, it is surprising the ability novice players can gather so quickly.

At the same time there was a Mixed Triples Semi-final, this game proved to be very close with both teams tying on the 17th end. The deciding bowl was delivered by Barry W. who had a slight wick to go on and take the jack into the ditch, as you will see from the photo a toucher still touching the jack in the ditch is a killer. The final score ending up as 15-13 to Barry W, Yvonne and Dave J, against Ian, Josie and Roy. It was worthy of a final.

On Monday there were 2 Quarter-Finals  of the Australian rule pairs competition in the evening. The honours went to Paul and Ian against Derek and Angela C 12-9, in the other game Dave J and Barry W came out winners against Ann C and Ley 18-8.

Tuesday is the last Club night of the season, next week Tuesday evening is the Watson Twighlight Bowl, with Fish and chips of course.

Wednesday evening brought the final of the men’s 101-up competition between Paul and Ian, it was close and at one time an impromptu umpire who was visiting the club was called to pontificate on one end, we are very grateful to him for sparing his valuable time, the final score was 109-91 to Paul.

Thursday and another competition game, this time it was the first Semi-final of the Aussie pairs competition, Ian and Paul took on Martin and Mark, it was game that was eventually settled on the last end. Martin/Mark led for nearly the whole of the game and only lost on the last end 15-18.

On Friday the Ladies had their annual lunch at The Pewsham, Chippenham. It was a very enjoyable and they all enjoyed them selves.

To round off the week on Saturday there were 2 events both in the afternoon firstly the Ladies Fun Day was a great success, Pat Ran out as winner, but the scoring caused much fun and hilarity!

The men’s pairs final turned out to be an exciting game with Roy/Ian playing Mark/Martin. With one end to go Mark and Martin were trailing by 3 shots and a terrific delivery from Martin took the jack into the ditch for a moment it looked like they had scored 4 to win the match, unfortunately it was a 3 and an extra end had to be played, again with his last wood Martin took the jack into the ditch but failed to get the shot so Ian/Roy won 17-16. It is the first trophies to be presented event if they were not engraved.

Only 3 weeks to the end of the season, this week it’s the start of the West Wilts White Horse League finals. This is the men’s Tuesday afternoon 4’ s, as Calne ‘A’ won Division 3 this year they are in the finals along with the 4 other division winners and the 3 best runners-up.

The finals are held at Spencer Melksham on Monday (quarter finals), Tuesday ( semi finals) and the final being held on Thursday, all start at 2pm

Calne A were against Broughton Gifford ‘A’ on Monday and managed to win on the last end 16-15, they played Chippenham Town C on Tuesday and unfortunately lost 15-19, this is the second time they have reached the semi-finals, however to be one of the last 4 in 5 leagues of 48 teams is an achievement.

On Tuesday there is the normal Club night at 5-30pm for. 6pm start.

Wednesday the ladies had two triples teams in the “Lavender and Lace” event held by Chippenham Town. Always an enjoyable occasion. 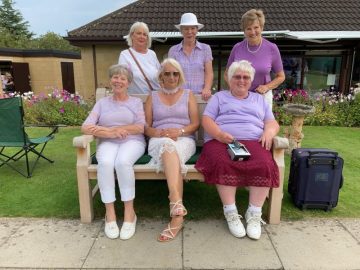 Wednesday evening saw the final of the Gunning Cup, the oldest cup in the club dating back to 1920 it was against Dave J and Martin S.The final result was a win to Dave J, A very entertains game.

There was also a chance to recreate the winning pair from the Men’s 2 wood final.Dave J. being the winner, 18-8

Thursday the ladies had 3 triples teams at the Coronation Triples competition which is an all day event. This was held at Pewsey BC. Despite wet weather the teams had a good day.

On Saturday it was the Ladies triples final in the morning and after 2 and half hours the score was 17-17 after 17 ends. It was Karen, Sue, and Yvonne against Ann C, Josie and Ann B. Below is a picture of the 2 teams, both put up a great show of bowling, nip and tuck all the way, but with a single shot on end 18 the team led by Ann B, with Ann C and Josie ran out winners, the spectators certainly enjoyed it, but your correspondent just cannot get the cry of 1 yard out of his head!!!

The Ladies are holding a day of celebrations in respect of their Diamond Jubilee, hard to think that 60 years ago, the Ladies started their own part of Calne Bowls Club and 2021 has proved to be a good year, with a number of new Lady members and success in many field of the bowling world.

The day was a great success and introduced lots of people to bowling, Now the photographs, team/group  ones first 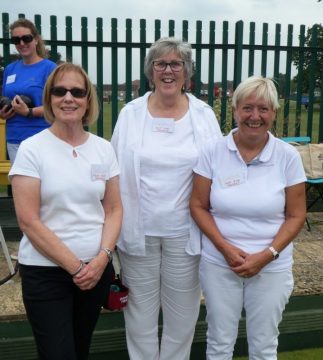 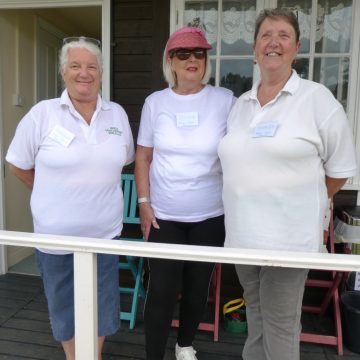 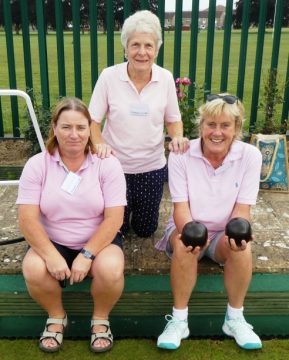 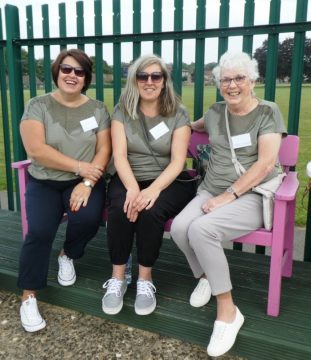 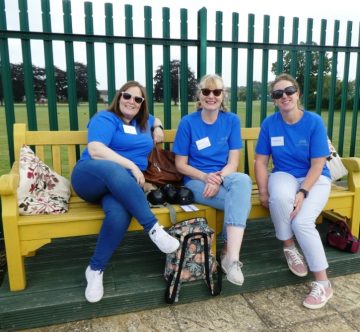 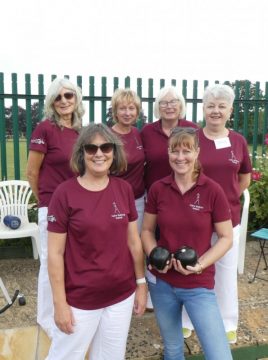 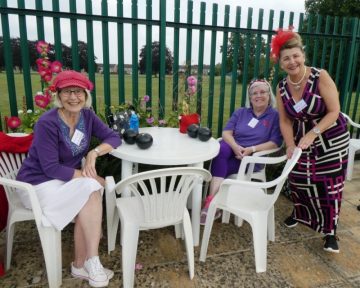 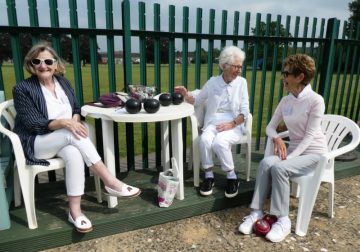 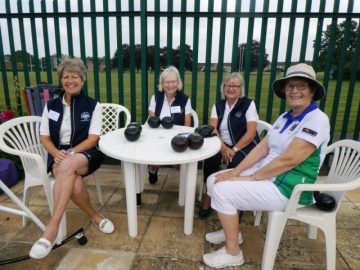 On Wednesday Yvonne McColl and Dave Johns from Calne travelled to Avon B.C. to play Dave Betteridge and Dorothy McNeish from Trowbridge Town, in the final of the West Wilts Holloway Mixed Pairs Competition. They were supported by a small ray of Calne members. As in the previous rounds the Calne duo showed their skill and on the 17th ends the game was over with the score standing at 23-9 and the Calne pair had won. Congratulations to Yvonne and Dave, the first time Calne have won this competition.

Now here are some photographs of the event.

Here are some pictures from the day, sorry for the delay.

Whilst the day was overcast, it remained dry and the day went well, everyone appeared to enjoy themselves and it was good to meet people from outside of our local playing area, in connection with this many thanks to those who attended from Poole, Lambourn and Cirencester.

Now follows a gallery of the day and the awards