The Club, represented by our Chairman Barry Wicks, today signed the final documents for our own lease.  This now gives us the chance to take one of the biggest steps the club has taken, to grow and develop our great club.

We have been in existence since 1914, through good and bad times, but this heralds the start of a new era for bowls in Calne.

A lot of work is now needed to achieve the next steps and Covid-19 is not helping, but that will not stop our progress, maybe delay it, but not stop it.

After making the best of things in this Covid 19 year, we finally get to closing the green.

A big thank you to, not in any order, Mike & Mayumi, Josie,  Barry K, Martin G, Roy, Ley, Les, Rod, Sheila and Steve. Your correspondent just bossed people about.

Not to forget Martin S who turned up after we had finished, note to myself, must start at 11am and to remind Martin to have an early night!!  hehe.

Thanks for the chat Martin.

Anyway, here are some pictures and don’t go on about social distancing,!

In between the showers 6 members braved the green on its last day for bowling.

Yours truly was able to get the following pictures, but the fun continued until the last Wood rolled down the green into the ditch!

Anyway here are a couple of photos, sorry none of the players, Ann C, Sheila, Barry K, Josie, Ley and Mayumi, failure on cameraman’s organisational skills!!

After several weeks, the Calne Short Mat Club has got its ESMBA covid safe status.

On Monday 5th October, Ann,John and Stuart, set out how the sessions will run and cleaned the carpets. Sessions will start on Monday 12th October and will run as before, with restrictions, every Monday 2pm,  Wednesday 2pm  and Thursday 6-30pm.

We are limited to 2 mats and 8 members, no visitors allowed, booking is through Ann, who is ensuring all members wishing to bowl will get a fair share of the sessions.

The first week has already been fully booked, so whilst we are not back to our attendances of 20/30 every time, we are at least back at Beversbrook and hopefully as and when restrictions are eased we will be best placed to take advantage of them, below are photographs to give members some idea of what to expect.

We would like to take this opportunity to thank Calne council, in particular Kevin for all the support we have received. 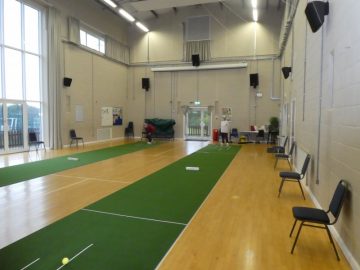 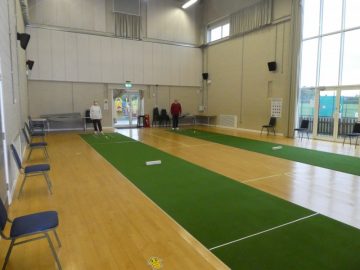 On Friday 9th October the last woods will be bowled at Calne for this year.  To say it has been an interesting year would be an understatement, but members have been able to bowl  socially through a booking system, club competitions have been played and the Australian Pairs competition, which has been introduced to the club with great success this year, looks like it will be a regular feature.

In addition we have increased our membership.  The new members have really enjoyed  bowling on a green that has improved a great deal this year.  We were also able to let members of other clubs which have not been able to open this season, enjoy bowling on our green.

It’s been a lot of work organising everything  to ensure  Covid safety, but it has been well worth it.  A big thank you to all the members who have helped in so many ways.

Still more good news to come, so watch this website for information.

Bring on 2021. Calne Bowls Club is fit and well to meet the challenges that the year will bring.

Finally, as the outdoor club closes for the winter, the Short Mat Club at Beversbrook is starting, more of that shortly.

On the evening of the 18th  the 2 Wood final between Ian  and David took place, a return match after a previous final, unfortunately Ian lost again 10-16, but he is snapping at David’s heels so next year look out David.

No photos available I am afraid, they were camera shy!

At least the ladies were not camera shy!

Firstly on the morning of the 12th it was the Paul Mackie mixed singles, between Last nights runner up in the Gunning cup – Ian and our coach Roy.

It proved to be a tough match with Ian gaining an early lead after 4 ends, but Roy fought back and once he got in the lead he did not relinquish it, eventually winning 17-9, congratulations to Roy sand commiserations, again to Ian.

But Ian still has a chance of winning a final, he is playing David in the final of the 2 Wood singles on Friday 18th Sept

In the afternoon of the 12th, Mark and Martin S took on Barry W and David in the Men’ Pairs competition.

There was a point nearing the end when David Johns had the chance to level the scores, but it was not to happen and Martin S and Mark ran out winners

Sunday 13th and the Ladies took to the green in the evening, Ann B & Mary C took on Sheila & Mayumi in the Ladies Pairs, the game was a close one with Sheila and Mayumi winning 20-15.

No picture available at the moment.

David and Ian squared up tonight to see who would be triumphant, it was an exciting game

When they reached the 26th end the score was 20-18 to Ian, but on the 27th end with Ian holding shot, David took the jack to score 3 and run out 21-20 winner, well done David and Ian there is always next year.

Thanks to our photographer on site (Barry K) here are the happy pair, with commiserations to Steve P and Les, better luck next year.

Very busy afternoon, Delayed Pairs quarter final with Angela C & Carole beating Jan & Rita on the last end, alongside a Paul Mackie Trophy game ended with Roy beating Mary B, and on the other rink some new members had a roll-up, supervised by Mary C.