The week started with the Bowls Wiltshire Ladies Top Ten competition against Wanborough on Sunday at Calne. It was a very enjoyable game with a win on one rink and the singles game went to 20-20, Wanborough getting the win on the very last shot. The match ended in a 3-1 loss. Despite a very wet afternoon the match was well attended, supported and enjoyed by both clubs, photos below. 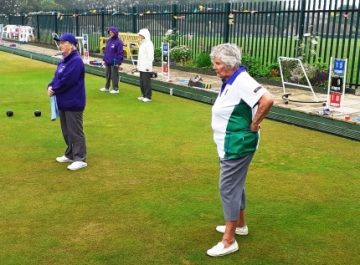 Ann B looking very concerned, even though she was the winning skip!

On Monday afternoon the Mixed team were due to go to Warminster in the North Wilts, however it was cancelled due to rain. The Ladies were involved in the National Triples competition and unfortunately lost 25-9 to Chippenham Town and 3-2, after the minimum 5 ends had been played (rain stopped play) to Swindon North End, better luck next year.

On Tuesday all 4 teams were in action, first the Ladies in the Seidal League – Blues were at home to North Wilts Poppies and lost 5-26, whilst the Greens were also at home to Box and won 18-7.

In the Men’s White Horse League the ‘A’ team were at home to top of the league Trowbridge Westbourne ‘A’ and lost 10-23, whilst the ‘B’ team, who do not have a game, had a roll-up!

On Wednesday the Scouts were unable to visit having had to revert to virtual scouting  due to Covid restrictions. We hope to host them later in the year.

To round off the week on Friday the Ladies in the Triples League were at home to, yes you’ve guessed it, Trowbridge Town! The ladies had yet another win in this match, Calne 4 points Trowbridge Town 2 points (37-30 shots). Very well done to both rinks.