The week started with a dedication of the rose garden in memory of Colin Chatwin, the day was well attended with both members and visitors alike, all in all a great success. I am hoping to set up a gallery of the photo‘s when they have been gathered in, in the meantime we have memories of a great day that did Colin proud, with thanks for the donation of the raffle and spider money to the club (£205) from Ann C. In the meantime here is a taster of the photo’s – the start of the conga with Ann C leading off and the rose garden dedicated to Colin in the background 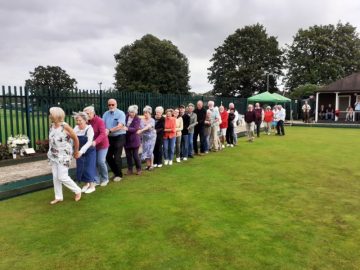 On Monday the Calne (North Wilts) Monday Mixed team played their last game this season against  Warminster at home and won 56  – 38, 2 rinks to 1.

On Monday evening, 2 teams were in the quarter final of the MWTL Wilson cup, playing Holt and Spencer Moulton, unfortunately they both lost, but getting this far was a great achievement, it was a wet and gloomy night all round!

On Tuesday the Calne A team in the WHL were the only team at home, they played Trowbridge Town A and in a very close match ran out winners 21-18, keeping their top position in division 3. The other 3 teams were away, the Ladies Siedal teams went to North Wilts Poppies (the Blues) and Box (the Greens), the remaining WHL team Calne B were away to Corsham B and on a very soggy green won 16-14. Also on Tuesday  two ladies attended the Bowls Wiltshire Ladies Presidents day hosted by our president at the Wroughton B.C. This was a very good day. One which both said they enjoyed very much and finished with a very nice meal. In the evening it was club  night as normal.

On Wednesday the Ladies triples were at home to Blue Circle, start time 6 pm. After a close game, played on a dry evening the result was Blue Circle 39 Calne 32.

Thursday brought 2 games in the men’s MWTL, Calne ‘A’ were away to North Wilts ‘B’ and won 52-43 (10-2pts) which meant they have won the Division 2 title, with 2 weeks to go.  In the meantime Calne  ‘B’ who were 3rd in the league slipped to 4th due to losing at home to Corsham by the smallest of margins 45-47 (4-8pts), they do have a game in hand, that will be played Monday evening.

In conclusion the week continues with many of the club’s competitions as they near the finals.