At the Calne Bowls Club meetings in August and early September it was suggested that a short mat bowls club might be formed.  Martin Grugeon, the Buildings Manager at C.B.C. began, on his own initiative, to search for secondhand equipment as it was realised that to set up a club with new mats etc would need in the region of £4,000. He found a mat in Bedford for £125 which came with fenders and delivery mats. Pip and Stuart Beard then drove to Bedford, paid for it and brought it back.

It arrived at C.B.C. H.Q. on a Club night (Tuesday) and, as it was rolled out on the carpark, it brought some very excited people off the green. Another mat was then purchased from Cornwall, Pip and Stuart doing the payment and collection duties again. We now had 1 mat stored at the Club and another in Stuart and Pip’s shed.

The search for a venue then began in earnest.  Martin came to the fore again and, after many false attempts and an assortment of unsuitable halls inspected, Kevin Whitehorn, Head of Leisure at Beversbrook Sports Facility said we could have sessions on a Monday, Wednesday or Thursday, providing that the mats/equipment could be put on wheels. After much head scratching, and searching online, Martin found a 3- mat trolley at the Bournemouth Electric Bowling Club, for £90.  Stuart and Andy Collier hired a van and collected it, picking up the 2 mats from their temporary homes too, en route to Beversbrook, where the mats were installed on the carrier.

After buying straps, Martin making centre blocks and another set of fenders, and being given some yellow jacks, we were up and running, for a total of £579.45.  At that moment in time Christie Miller Indoor Bowls Centre in Melksham closed and their surplus funds were handed back to their member clubs, enabling Stuart to be repaid for his initial outlay.

On 10th October 2018 an inaugural meeting was held at the Calne Bowls Club Pavilion,attended by 18 people, with 8 apologies. It was agreed to have the first playing session on Wednesday 17th October and 26 people turned up at Beversbrook to support the new venture.  It was an interesting afternoon as we only had room for 16 people to play, but it was great fun as a lot of the attendees had not played short mat before. The following week only 11 players turned up but by the end of October we had 8 fully signed up members (all Calne Bowls Club players) and playing numbers were growing.

At the end of November full member numbers had risen to 20 and by the time the Christmas session was held it was 26, fortunately not all of us turning up to play at the same time.  At the end of the year we realised we had a success on our hands and, with Kevin’s support, applied for a Sports England grant enabling us to buy 3 brand new mats as well as 10 weeks hall rent, publicity costs and coaching lessons.

We arranged for an AGM to be held at the Lansdowne Arms in Calne to formalise the Club and decide the way forward.  A constitution was approved and an agreement was reached that we would join the WSMBA (as well as the ESMBA).

We joined the WSMBA on 14th March 2019 and since then have held 4 Monday afternoon public tester sessions.  As a result of this our membership now stands at 34. The Sports England grant was approved and the grant paid to us on 22nd March 2019, so the order for 3 new mats has been placed.

This is an ongoing story as, up to now, we have been mostly Calne Bowls Club Members.  However, we now have 8 general public members, with the possibility of another 3 or 4 joining before the end of the month, so we have taken the decision to run the club through the summer on a Monday and a Wednesday, thanks mainly to John and Ann Harris, who will be in charge.

The summer of 2019 was a good one for the Club, attracting members new to the game (membership is now up to 44) and for the first time in September all 3 mats were in use. 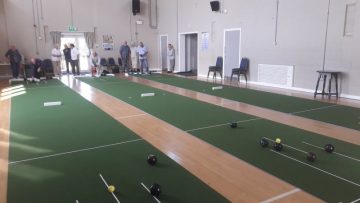 The first Thursday evening session took place on Halloween night, 31st October 2019 at 6-30. It was well attended and the evenings continued until in December it was attracting 16 members. In the meantime the first AGM took place on the 23rd November at the C.B.C club house and was well attended, there is to be an annual lunch on the 2nd Feb 2020. We are also looking to enter a league in the summer and 2 of our 54 members have become the first bowlers from CSMBC to register with ESMBA, namely Ann C and Yvonne M.

In addition to this the return Friendly game against Urchfont took place on the Tuesday 26th November, unfortunately CSMBC lost having a problem getting used to the shorter mats.

The story is not yet over there will be more to come, it will be continued………………..Stuart Beard December 2019